The Centre" />
Skip to content
When Theresa May spoke to the CBI last month she urged businesses to invest in Britain for the long term. The challenge for business is that in an uncertain environment … END_OF_DOCUMENT_TOKEN_TO_BE_REPLACED

When Theresa May spoke to the CBI last month she urged businesses to invest in Britain for the long term. The challenge for business is that in an uncertain environment firms often prefer not to invest, as they could make poor investments and therefore hurt performance. The Prime Minister might have a point though as businesses in the UK have tended to underinvest during more positive conditions too.

When the management team of a company runs out of ideas on how to deploy capital, spare cash often gets returned to shareholders through dividends, and in recent years increasingly through share buybacks. The impact of a company buying back shares is that it tends to improve the earning per share (EPS) measure, which may provide some short-term boost to share prices.

If sufficient investment has not been forthcoming, then the rate of profit growth is likely to be falling too, which is another reason why managers may decide to boost the EPS figure through buybacks. But it is this lack of investment that is so damaging for the long-term growth of companies. This kind of behaviour also appears to be at odds with the duties of directors as set out under section 172 of the 2006 Companies Act. This requires directors to promote the success of the company and in doing so have regard to the likely consequences of any decision in the long term.

One critical question that needs to be understood is to what extent does the strategy of persistent share buybacks indicate poor management performance? In order to test whether the prevalence of share buy backs does tell investors something about the quality of the management team, the Centre analysed the FTSE 100 between 2010 and 2015.

First, we divided up the FTSE 100 into two cohorts. One high growth and one low growth defined by rates of total shareholder return of more and less than 13.7% per year. We then divided up these two cohorts further into firms that do a lot of share buy backs and those that do less. High levels of share buy backs were defined by firms that acquired more than 10% of shares outstanding on average over the period. The four cohort sizes were at roughly similar levels without any significant concentration of a specific sector in any of the cohorts.
A total return index of each cohort was then calculated over the period. The results as shown in chart 1 were striking. 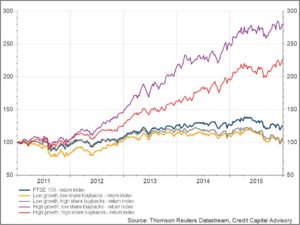 First, it is abundantly clear there is no difference between poor performing firms who buy back lots of shares and poor performing firms who buy back fewer shares. Hence share buybacks tell us almost nothing about the quality of the management team, although the total shareholder return tells us rather a lot. Indeed, total shareholder return over rolling five periods provide investors with critical information to inform the way they should vote for or against management proposals including pay.

When it comes to the best performing firms though, the data is striking in that firms that buy back fewer shares outperform on average by 20% over the period. Hence there may well be a link between management teams who can allocate capital effectively by investing for the long term, and therefore have less need to pursue large share buyback programmes. Conversely, firms that pursue extensive share buybacks may well indicate that the management team has run out of ideas to deploy capital which is why total returns are lower.

So how should investors deal with management teams who demonstrate below average total shareholder returns and also buy back shares? Clearly fund managers should be voting on pay and on who should run each company using metrics such as rolling total shareholder return and the extent of share buybacks. Moreover, many of these metrics can be automated into specific voting decisions, thereby reducing the cost of corporate governance.

If management teams continue to argue that buying back shares is in the long-run interest of the shareholders and investors agree, then at the bare minimum such a strategy should be automated with remuneration reduced. This is reminiscent of the Ryanair pilot who responded to calls to reduce the number of pilots per plane from two to one by suggesting that the CEO’s job could be undertaken by a junior cabin crew. Behind this jest is an important principle that management teams need to earn their positions and their remuneration.

However, if fund managers abrogate their responsibility on behalf of millions of savers by refusing to vote against management teams where the metrics are poor, then poor quality management teams will continue to be paid for poor performance and will potentially damage the economy in the long run.

The image is by ‘Tredok’, published under CC BY-SA 2.0